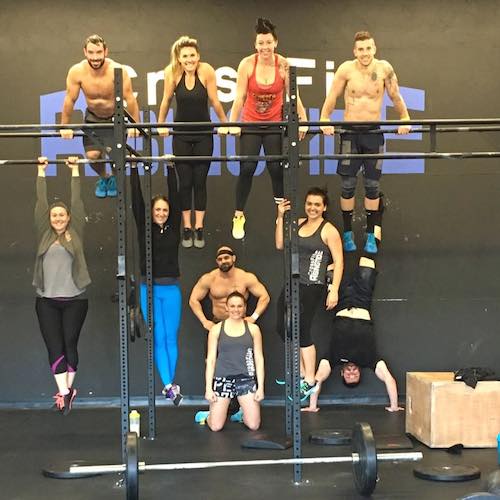 No ellipticals, treadmills, or stationary bicycles crowd the new fitness center at 778 Portland Road in Saco. Weights, bars, and rope–instead of machines–stand out against the black floors and walls. The 2,500 sq. ft., open-concept facility is dedicated to what Saco resident Kathryn Larochelle ’04 describes as “people-powered fitness.” Kathryn, along with Roger Levasseur, opened CrossFit Rising Tide in April 2015 after their membership in a CrossFit in South Portland inspired them to bring the fitness regimen to Saco.

Roger described the program as “functional fitness in one hour, scaled for anyone’s ability and constantly varied.” He programs each workout session and provides coaching. On any given day a workout might include kettlebell swings, push-ups, squats, running, lunges, or bench presses. New members take five one-hour introductory sessions to become acclimated with the movements and build a foundation for proper technique. A free community class is offered on Saturdays from 10-11 a.m.

Kathryn describes that, in the years since Thornton Academy, she’s found a life-altering passion: “I did not used to be athletic. CrossFit changed me. It gave me confidence.” After high school she attended Spa Tech Institute for cosmetology and worked as a hairstylist for nine years. She still cuts hair in a studio called Salon at Rising Tide, located right next to the CrossFit. 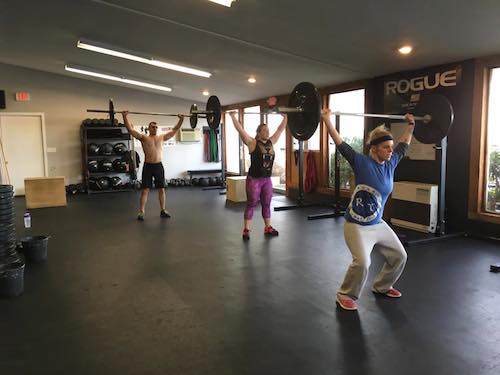 Kathryn said the best part of being a member is the strong sense of community, “everyone is very supportive of one another…we’re like a family.” She is excited that several Thornton Academy alumni have already joined her CrossFit team and she is proud to watch members improve their fitness and gain strength. “People are often changing their goals from ‘I want to look a certain way’ to ‘I want to feel a certain way,’” she said.