If Portland has been dubbed the “Top U.S. Beer City” and Maine’s craft brewers have been compared to rock stars, then Tom Madden  ’04 and John Paul ’04 have stepped into the limelight and into the news by founding Lone Pine Brewing Company in Portland’s East Bayside. Journalist Kathleen Pierce wrote in a Bangor Daily News article, “Lone Pine enters a crowded marketplace ready to turn up the volume.” 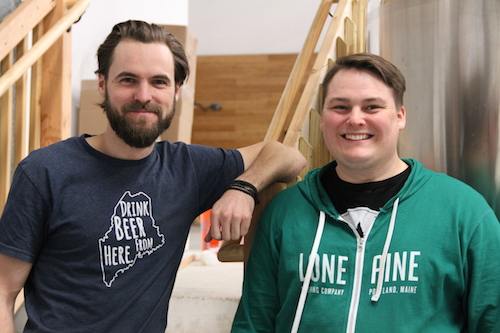 So when Tom Madden and John Paul were looking to open their own brewery and they discovered the pink building at 219 Anderson Street for lease, they knew it would be the right fit.

“The building has character,” said Tom, looking up towards the twenty-foot-plus high ceilings on a snowy February day. Postscripts caught up with the pair of alums hard at work preparing for their late spring 2016 opening. Taking over the space from a cement countertop business, Tom and John have gutted the building and installed a floor drain, hand washing station, and walk-in cooler. They’ve had to learn about plumbing, carpentry, and electricity in order to renovate, while hiring help for the tasks beyond their means. They’ve also painted. A lot.

Lone Pine Brewing Company sources their malts from Blue Ox Malthouse, a facility based in Lisbon, Maine, that processes barley, which is mostly grown in Aroostook County. Lone Pine has released their first brew—Portland Pale Ale—to select bars and distributors. When their tasting room opens to the public, customers will get to try varieties of beer from a test kitchen, which are unavailable in a market. Lone Pine joins a trend: Maine has become a nationally recognized hub for craft beer “experiences.” A recent Portland Press Herald article by Randy Billings examined the shakeup in Portland’s beer scene, as tasting rooms replace traditional bars. He noted that since 2011, the number of breweries in Maine has increased from 34 to an estimated 70, and in 2014 the estimated economic impact tallied $432 million. Another recent Press Herald article, by James Patrick, shared the University of Southern Maine’s new partnership with the Maine Brewers Guild. Students will get to test formulations and quality control for Maine craft beers in a research laboratory on campus.

This business venture can be traced back to Thornton Academy when Tom and John played in a band together. Tom participated in soccer, baseball, track, and music, and took interest in accounting and science. “I think in any field it’s important to be well-rounded,” said Tom. Both men agreed that Thornton provided broad programming beyond school hours that influenced their lives. John played drums and football, acted in plays, and performed at coffee houses. “Doing all that, even when you’re 17 and don’t realize it, it’s very entrepreneurial,” said John. 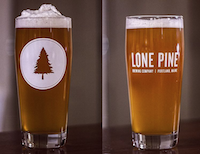 Since Tom’s family owns Madden Beverage & Brewing Supplies in Saco, he was “plugged into the craft beer world” early on. After earning a degree in finance from Bryant University in Rhode Island he returned home and started to sell brewing supplies at Madden’s, which meant he had more homework to do. An online course gave him a broad perspective on brewing and confidence to start thinking about opening his own business. Meanwhile, John had earned a degree from Emerson College in entrepreneurship with a focus in marketing, and spent six years working in marketing for a Los Angeles TV station. When John returned to Maine, they joined forces. With Tom’s brewing capabilities, and John’s sales expertise, the dream started to take shape, and they secured their location in August 2015.

These alumni entrepreneurs envision their brewery as a gathering place for people with similar lifestyles. Tom said they want to create “more than a product…a culture.” John believes their business will attract outdoor enthusiasts and urban professionals. “Having worked in the entertainment industry, we want it to be very events-driven—a mix of new and local music with new and local beer,” said John. While their target age range is 21-35, Tom acknowledged, “As the craft industry expands, the demographic is changing.” He witnessed this shift at Madden’s, where they’ve introduced to an older demographic within blue-collar families a wide array of craft beer offerings. “Madden’s changed peoples’ palettes,” said John.

So what advice do these two offer other aspiring entrepreneurs? “Take your budget and increase it by twenty percent!” laughed Tom.

“Choose your partners wisely,” added John. “Like any good craft, it’s all about balance.”